A seal assists in connecting systems or mechanisms together by preventing leakage, containing pressure or excluding contamination.

A flange Isolation(insulation) gasket used in conjunction with an isolation kit (washers & sleeves), does all these things, but also provides electrical isolation, reducing or mitigating the build up of corrosion.

1. What is Pipeline Sealing?

2. Why do Pipeline Sealings Fail?

Why do Pipeline Seals Fail?

Over 80% of leakage or isolation issues are from poor installation.

The most common pitfalls for a good seal is installation.  Over 80% of leakage or isolation issues are from poor installation although we see this potentially changing in the future due to the fact that oil and gas companies are becoming more concerned about greenhouse gas emissions.  As levels are put in place as maximum leakage levels, gaskets that were once deemed acceptable from a sealing level would potentially be labelled as “leakers” requiring a selection of a new type of isolation gasket. This could be entirely independent of the method of installation.

Most likely it has to do with installation.  Over 80% of failures are attributed to installation issues.  The most common installation issue is not creating a large enough gap for the gasket to EASILY be inserted between the flanges.  Flanges should be aligned prior to the insertion of the gasket. The second most common cause of failure is improper application of torque.  Make sure to use the manufacturer’s recommended torque, to install in three even increments of 33%, 66% and 100% of the recommended torque. Also, be sure to use a “star” pattern when torquing.  A few other quick checks would be to make sure you are not using a lubricant that contains metallic particles, make sure that your washers are not “reversed” the metal washer must be the washer contacting the nut and make sure the nut “flat” is toward the washer, not the nut side that has raised printing.

Pipeline conditions have been changing over the last 50 years.  More and more aggressive chemicals are finding their way into the media stream (hydrogen sulfide, steam, carbon dioxide, carbon monoxide, etc.).  Temperatures have risen, pressures have risen and we are seeing a trend towards larger diameter pipelines which can be much more difficult to properly install and seal.

As a world leader in the manufacture of isolation products coupled with a significant engineering team, GPT has discovered that the changes in our pipelines are affecting traditionally used isolation gaskets.  The combination of higher temperatures and higher pressures can cause blowouts of GRE based materials that do not have a glass transition temperature high enough for the operating temperature. Chemical combinations of sour gas can chemically attack GRE.  What can compound this issue is the propensity for GRE to all media to permeate into the body of the gasket. This can cause a loss of volume, mass and density of the GRE. This in turn, can reduce bolt load causing greater leakage and potential for blowout.

Changes in the workforce have not helped pipelines to become better sealing either.  The 5 year average for pipeline incidents according to PHMSA data shows that there have been an average of 666 incidents for the 5 year period from 2014 through 2018, however the 5 year average from 1999-2003 was only 474 incidents.  Some likely reasons are that millenials are changing jobs at a much greater rate than baby boomers. LinkedIn has studied 500 million users over a 20 year period and has found that a millennial will change jobs an average of four times their first 10 years out of school.  This means that the likelihood of a pipefitter being a long term, highly trained individual is diminished. Since more than 80% of gasket failures occur due to poor installation, a lesser trained workforce will not benefit the situation.

Unfortunately, Glass Reinforced Epoxy (GRE) the material that most isolation gaskets are constructed of, has significant permeation (see photo to the right).  This is a GRE gasket (G10 in this case) with 300psi Nitrogen gas. Snoop™ leak detector has been applied and it is evident that the nitrogen gas is easily passing through the gasket.  Carbon monoxide and carbon dioxide would perform similarly as would ethane and methane.

Oddly enough, isolation gasket manufacturers for years knew that the gases permeated through the GRE, but attempted to develop ways to use the media to drive through the body of the gasket and push the seal against the flange creating a seal (often called a “self energizing seal” and sometimes called a “leak to seal” design).

Fortunately, GPT has developed a patented method for sealing the media before it ever gets to the GRE.  The product is called VCS-ID and has a PTFE inside diameter (ID) seal (see image).

The PTFE ID seal is machined to lock into the GRE and the 316SS metal core so that it is unable to come. 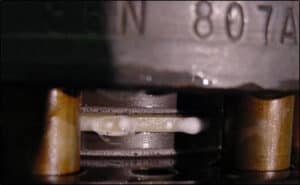 When I put “Snoop” on my gasket in a flange, bubbles appear very quickly and easily.  Can I put more load on the gasket and stop the leak?

Probably not if you are using a glass reinforced epoxy (GRE) gasket.  It is much more difficult to compress a GRE gasket as compared to a fiber or PTFE gasket.  GRE unfortunately is prone to “permeation” and what you will often be seeing is permeation through the gasket rather than leakage past the seal.  The solution to this is VCS-ID or Evolution which has a PTFE seal that stops the media before it gets to the GRE.

What is the best sealing isolation gasket? 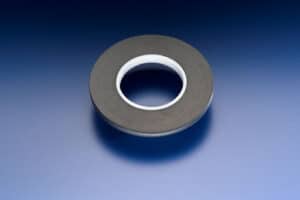